I’ve performed in theatres, cabarets, arts centres and village halls from my homeland of New Zealand to Sydney, Melbourne, Hawaii and London and around the British Isles. I’m doing a little more acting lately with small roles in The Crown (Netflix) and Suruli (Bollywood).

My solo projects have covered the Great American Songbook, Stephen Sondheim and a tribute to Tony Bennett and I’ve toured mid-scale venues around the UK and Ireland quite extensively. I’ve taken my show ‘Waterloo Sunset’ (formerly titled ‘Scenes From a Well-spent Youth’) to village halls, libraries and arts festivals around the UK and also performed it at the prestigious Pheasantry in Kings Road, London. 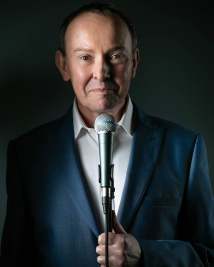 My approach is to seek out quality popular music and re-interpret it. Like a furniture restorer, I strip away the original arrangements to find the heart of the music and lyric.

I get comments like “so romantic!” or “I didn’t realise the song was about that” or “I never really heard the words to that song properly before”.

I curate my interpretations into themed shows with chat that provides context and builds audience engagement.

My key ‘partner in crime’ is Simon Wallace – ace pianist, arranger and producer.

Simon has worked with some of the UK’s most respected names in music, theatre and television. Together with Simon Brint he composed music for top TV series including Absolutely Fabulous, The Clive James Show, The Ben Elton Show and many more. He toured internationally with the Lindsay Kemp company, and was musical director for the West End production of Elegies for Angels, Punks and Raging Queens.

With beat generation poet and lyricist Fran Landesman, Simon has written songs recorded by leading artists on both sides of the Atlantic. In 1986, he was commissioned to compose a symphony for the former King of Thailand’s 60th birthday: a further commission came in 2006 for the then King’s 60th jubilee.

I also often work with the delightful Jenny Carr.

Classically trained, Jenny arrived from Australia in the early 1990s as keyboardist and backing vocalist for Jason Donovan’s world tour.

Since then she has carved out a diverse career, working with pop artists Julia Fordham, Bliss, Beverley Craven, Yazz, Billy Ocean, Imelda May & Ant and Dec. She has contributed to seven albums by iconic country-soul singer/songwriter Jeb Loy Nichols and backed artists from the legendary Muscle Shoals stable (Bonnie Bramlett, Donnie Fritts and Larry Jon Wilson) in a series of concerts.